Putin Thanks US for Help in Foiling Terrorist Attack in St. Petersburg, Says Ready to Return Favour

Spy Frode Berg, Released by Russia in November, Says Was Set Up by Norwegian Security Services

'Monstrous Hypocrisy': Russian Artist Pavlensky Comments on Charges Brought Against Him in France

DAVID BOWIE’S CONNECTIONS TO THE ILLUMINATI

Even after his death, the Illuminati promote David Bowie, so it’s hard to tell who the real person was.

That’s true of a lot of people brainwashed under MK-ULTRA.  As my secretary used to say, you never know who you’re talking to….

MK-ULTRA loves clones, twins, and alters.  Multiple Personality Disorder used to be the way people under attack were classed, and now they call it dissociative identity disorder; but these are just fake diseases and false diagnoses to cover up CIA’s ongoing crimes against humanity.

You can read more about the methods used by the Illuminati, Tavistock Institute, and Central Intelligence Agency to implement trauma-based mind control in books by Cisco Wheeler and Fritz Springmeier. 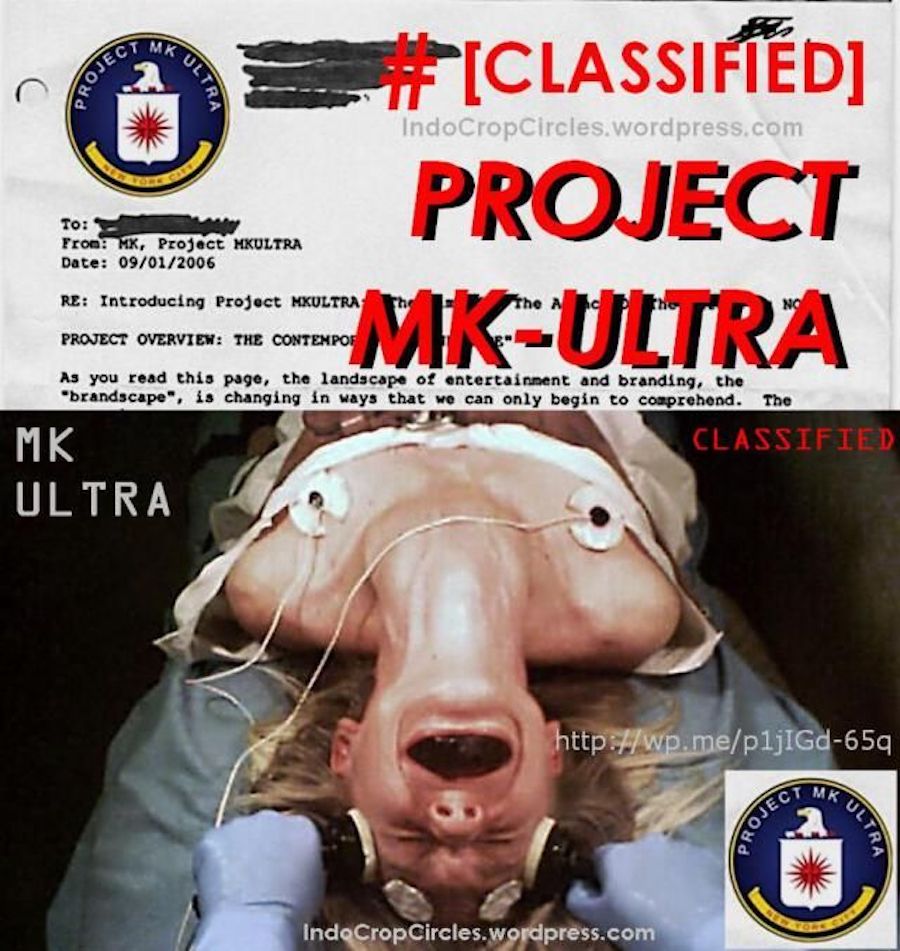 Cisco Wheeler is the daughter of General Earle Wheeler, the Head of Joint Chiefs of Staff, so she really knows what she is talking about.

See that blouse she’s wearing?  CIA uses leopard, tiger, and zebra prints for cartel signaling to mark women trained as beta sex-kittens.  Ms. Wheeler just likes that pattern, and she’s not going to let some douchebag in the CIA stop her from wearing it; but normally it’s not a good sign.

Similar imagery appeared around David Bowie in Cat People, starring Nastassia Kinski, another survivor of incest and abuse directed by the Illuminati, and Malcolm McDowell, who played a rapist entrained by the Tavistock Institute in Clockwork Orange. 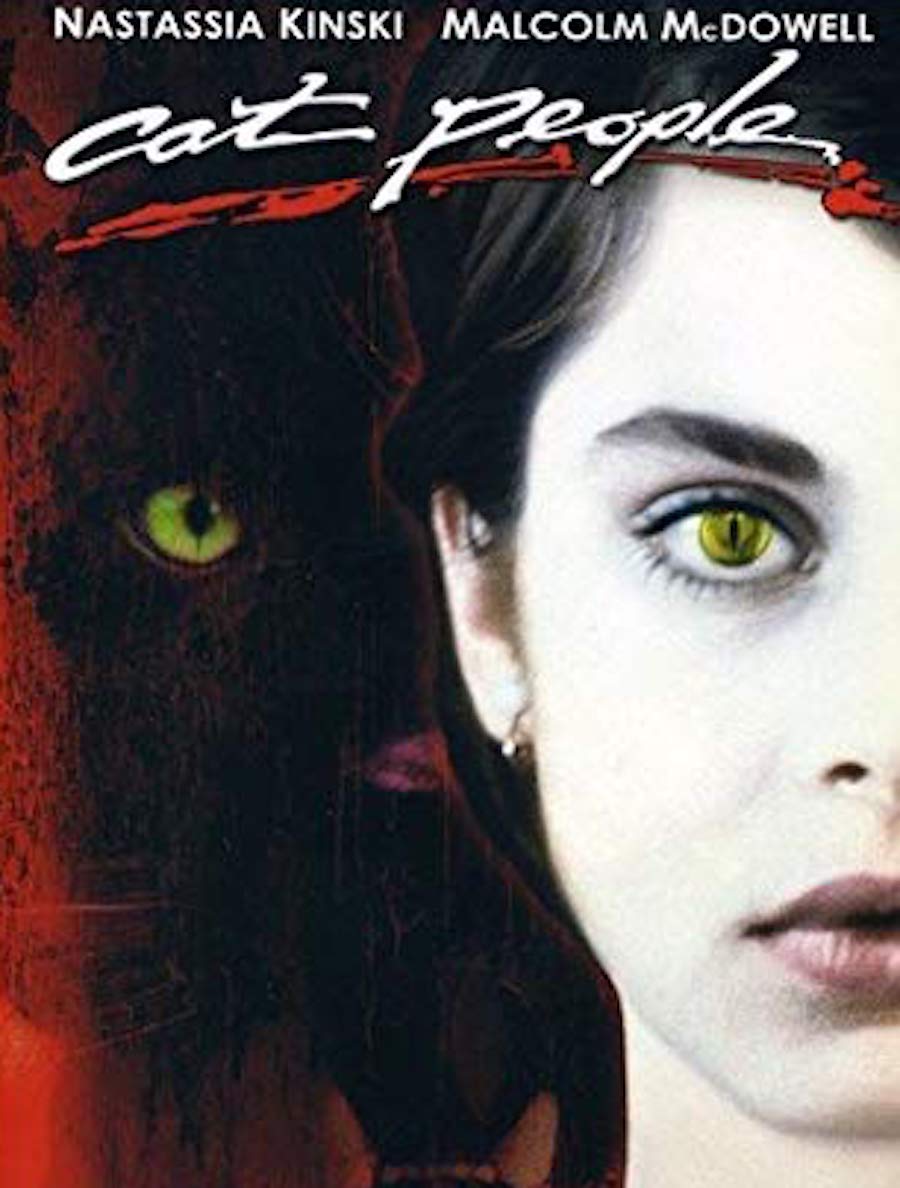 The video features panthers, robed figures, human sacrifices, and naked wretches crawling on their hands and knees while they look possessed by demons.

Further cartel signaling appears around David Bowie on the following album, where you see Bowie split into different alters. 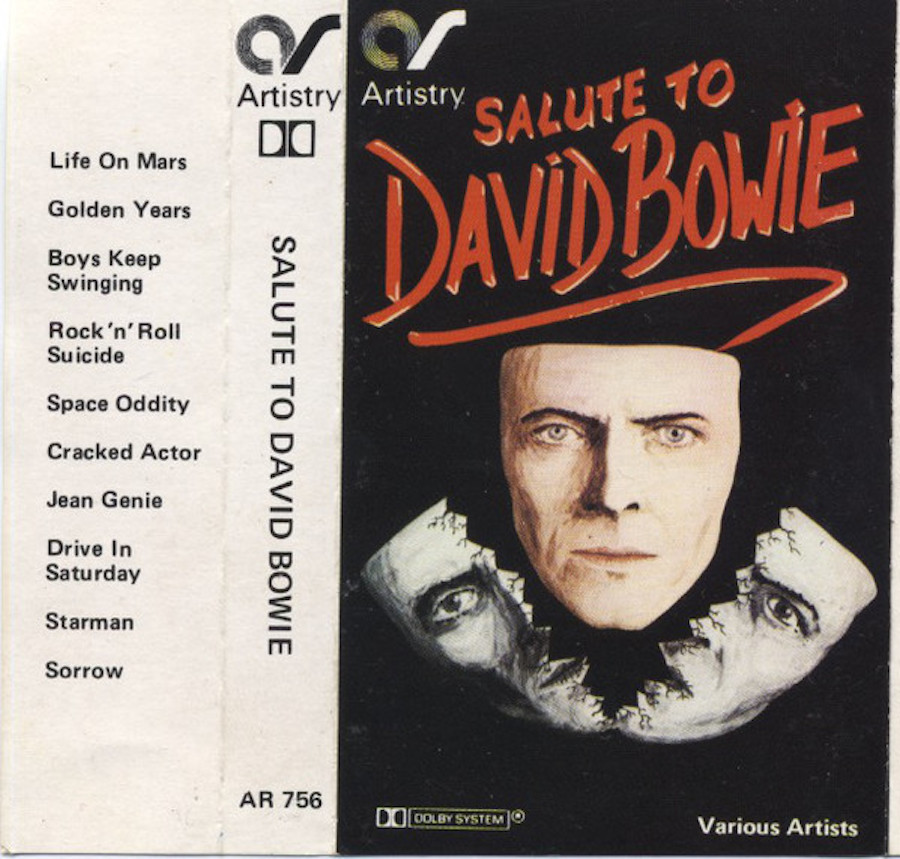 The Illuminati love masks.  You can see Illuminists like the Rothschilds at a fancy dress ball below. 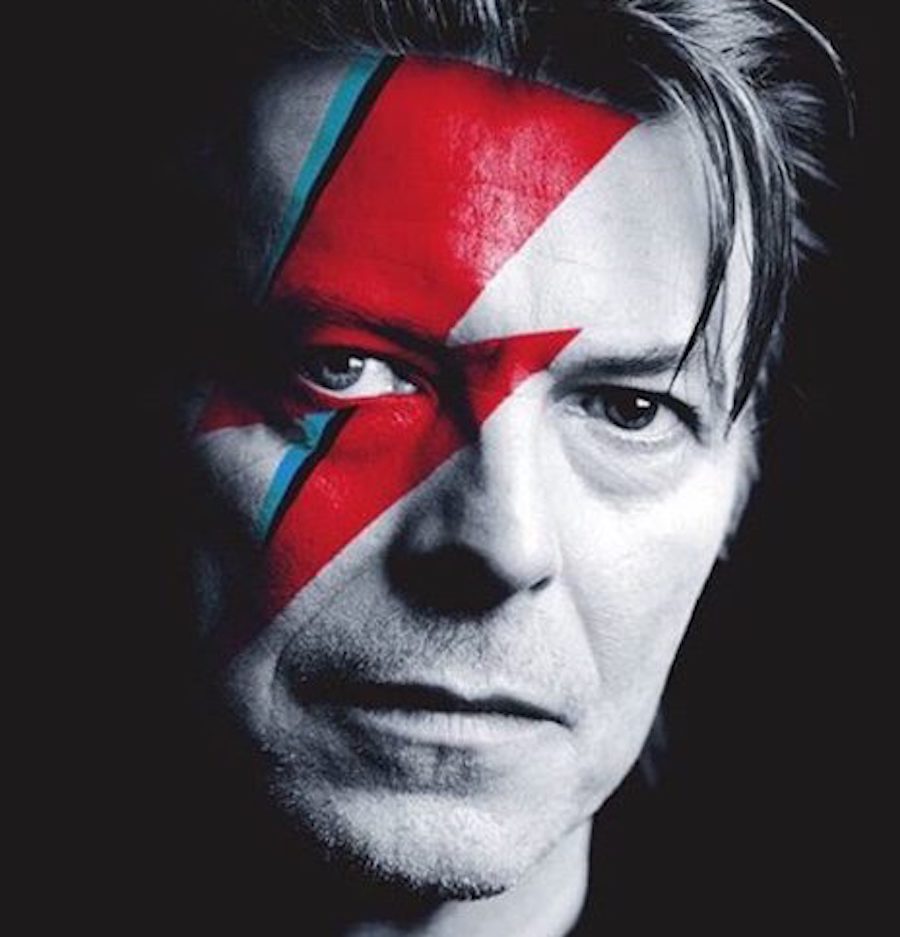 The lightning bolt splits his face, as it suggests the “splitting” that creates “alters.”  CIA used a similar symbol with the Grateful Dead.

The lighting bolt also suggests electricity.  The Illuminati, Tavistock, and CIA use electroshock (along with drugs, hypnosis, and sexual trauma) to erase people’s memories and to program them.

Nowadays the CIA can do microsurgery with lasers while you sleep–which can account for mystery bruises, marks, and strange dreams–but, back in the day, they had to do it in a hospital.  You know?  Like the hospital where David Bowie was held for four months in 1962.

After he got out of the hospital, Bowie, whose birth name was David Jones, was a different person who renamed himself after a knife.

David Bowie came out of that hospital with a permanently dilated pupil in one of his eyes. 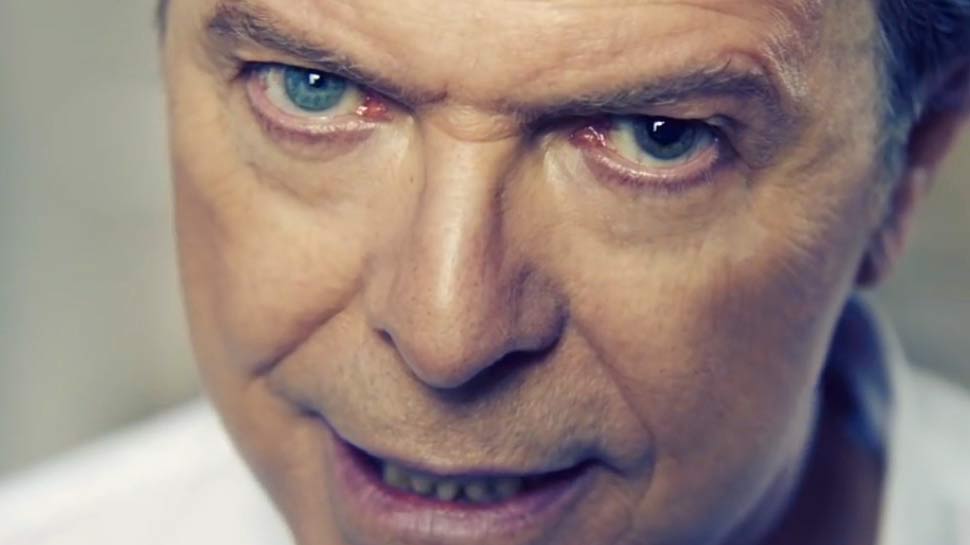 The Illuminati are a satanic organization, so that’s why he looks that way.  But his strange look is also the result of a cybernetic implant.  The Illuminati, Tavistock Institute, and Central Intelligence have been implanting people from at least the 1950s.  You can learn more in The Minds of Men, an excellent documentary by Aaron and Melissa Dykes about MK-ULTRA.

Cybernetics and the Minds of Men (part one)

Cybernetics and the Minds of Men (part two)

You can also learn more about cybernetic implants in the following database of one hundred mind control patents.

But you don’t have to listen to me.  Listen to David Bowie:

Offstage I’m a robot.  Onstage I achieve emotion.  It’s probably why I prefer dressing up as Ziggy to being David.

Or check him out in the film promoting his final album, Blackstar, where he appears with bandages over his eyes.

Albums like The Man Who Sold the World contain references to delusion, paranoia, and schizophrenia–symptoms of MK-ULTRA–while Bowie posed in a dress on the original cover.

Bowie’s hairstyle is another example of cartel signaling, through which the Illuminati mark their victims.  It’s called the Eye of Horus.

But how about his dress?  There’s no question Bowie was bisexual.  Here he is with his boyfriend Mick Jagger. Doesn’t that jewel look like someone’s controlling him? The Illuminati even use jewel programming.

The scum who do this to people aren’t just in the Illuminati, or with their dogs at the CIA:  They’re in NSA, USAF, and NASA.  The real reason for satellites is to beam directions into microchips in people’s heads, so it’s no surprise that Bowie wrote songs like Space Oddity.

The Air Force Is Full of Satanists, Rapists, & Child Molesters

Isn’t it weird how in the official video for Space Oddity, we see microwave signals and brainwaves, which are the real agenda behind the space program? 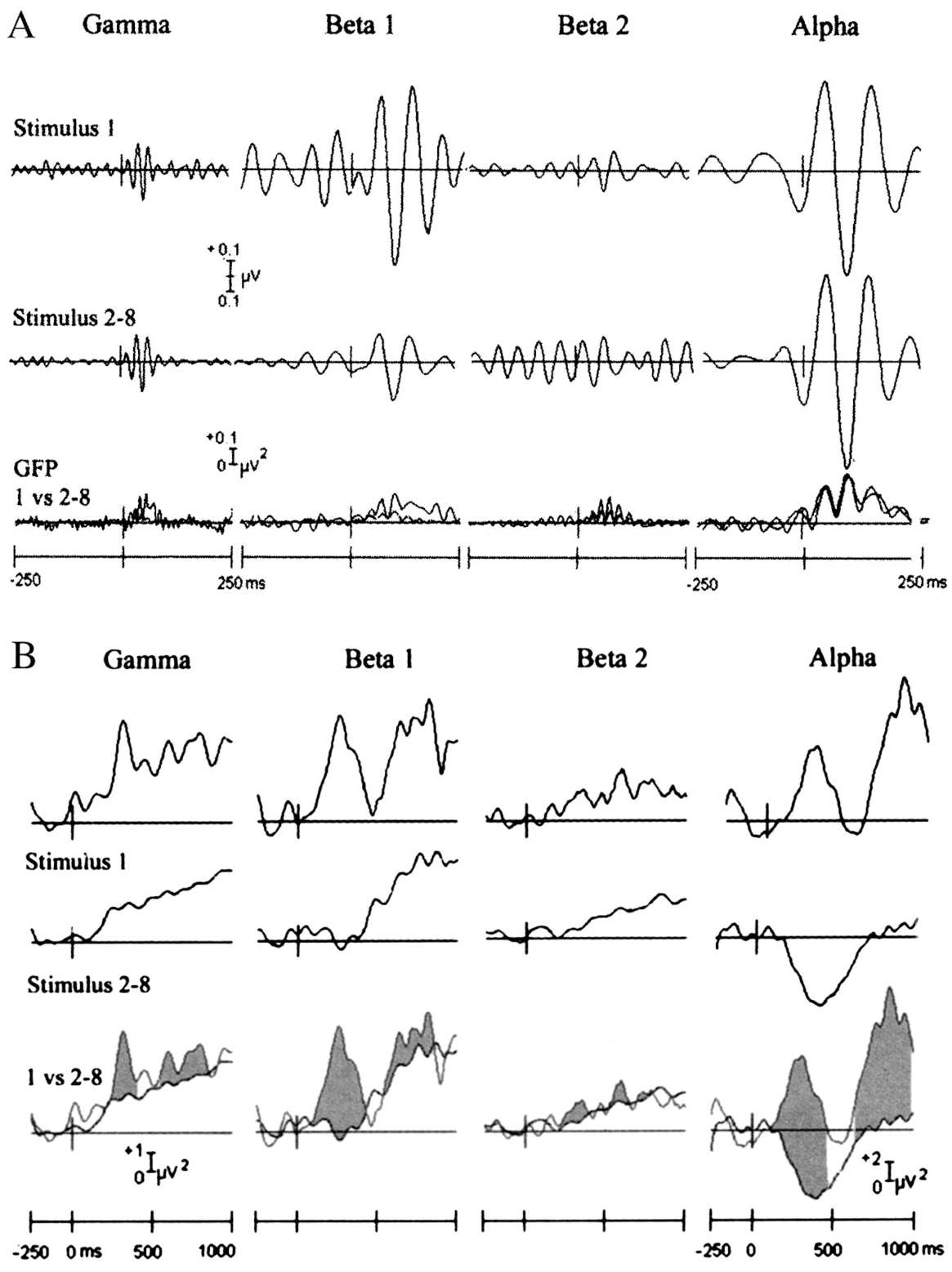 Bisexualism and transsexuality are Illuminati projects, which they promote through their control of the media, and through mind control; so it’s not surprising they used Bowie to promote gender ambiguity and sex changes.

There’s even a David Bowie Ziggy Stardust Barbie, so little girls and boys can become confused about their sexual identity.

As though Barbie weren’t enough of an unhealthy model for young girls….

Later Bowie would hook up with Iman–whose name may suggest “I MAN.” 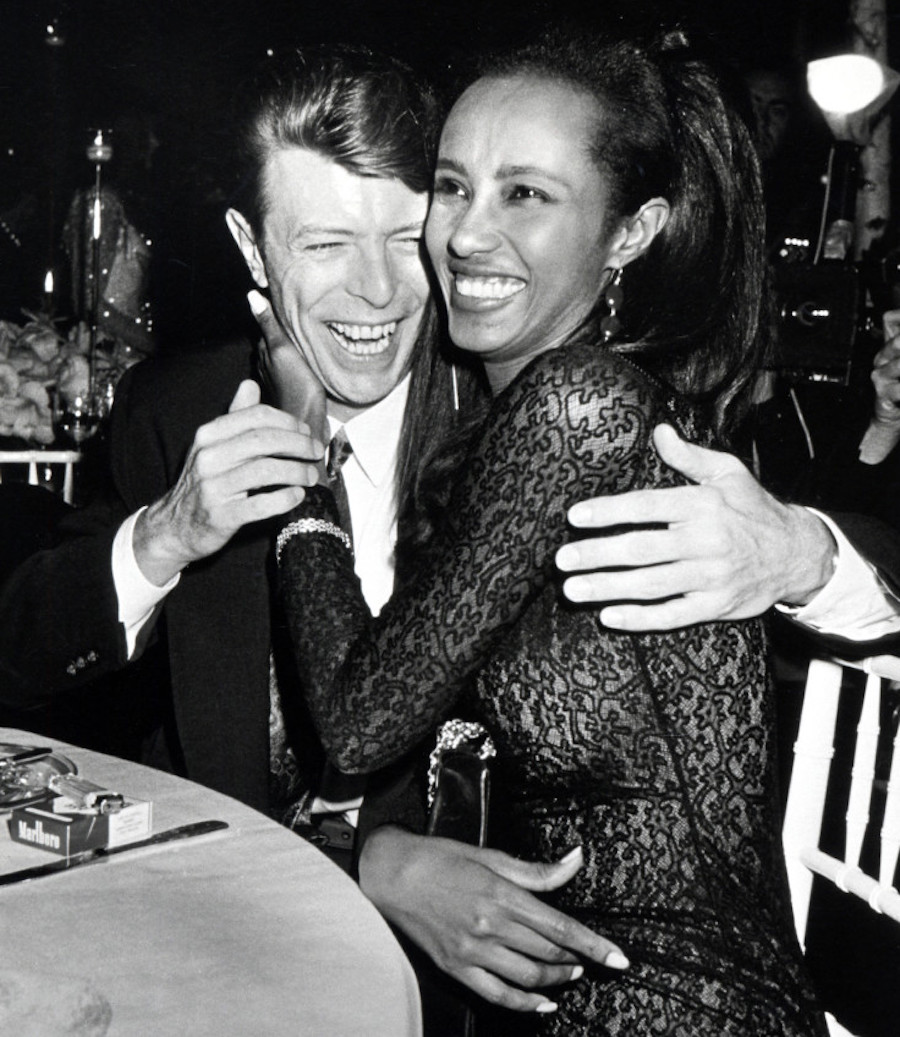 Earlier, David Bowie hooked up with Grace Jones.  Doesn’t she look like she’s under the influence of the Illuminati?  And how about the dazed look on Bowie’s face? 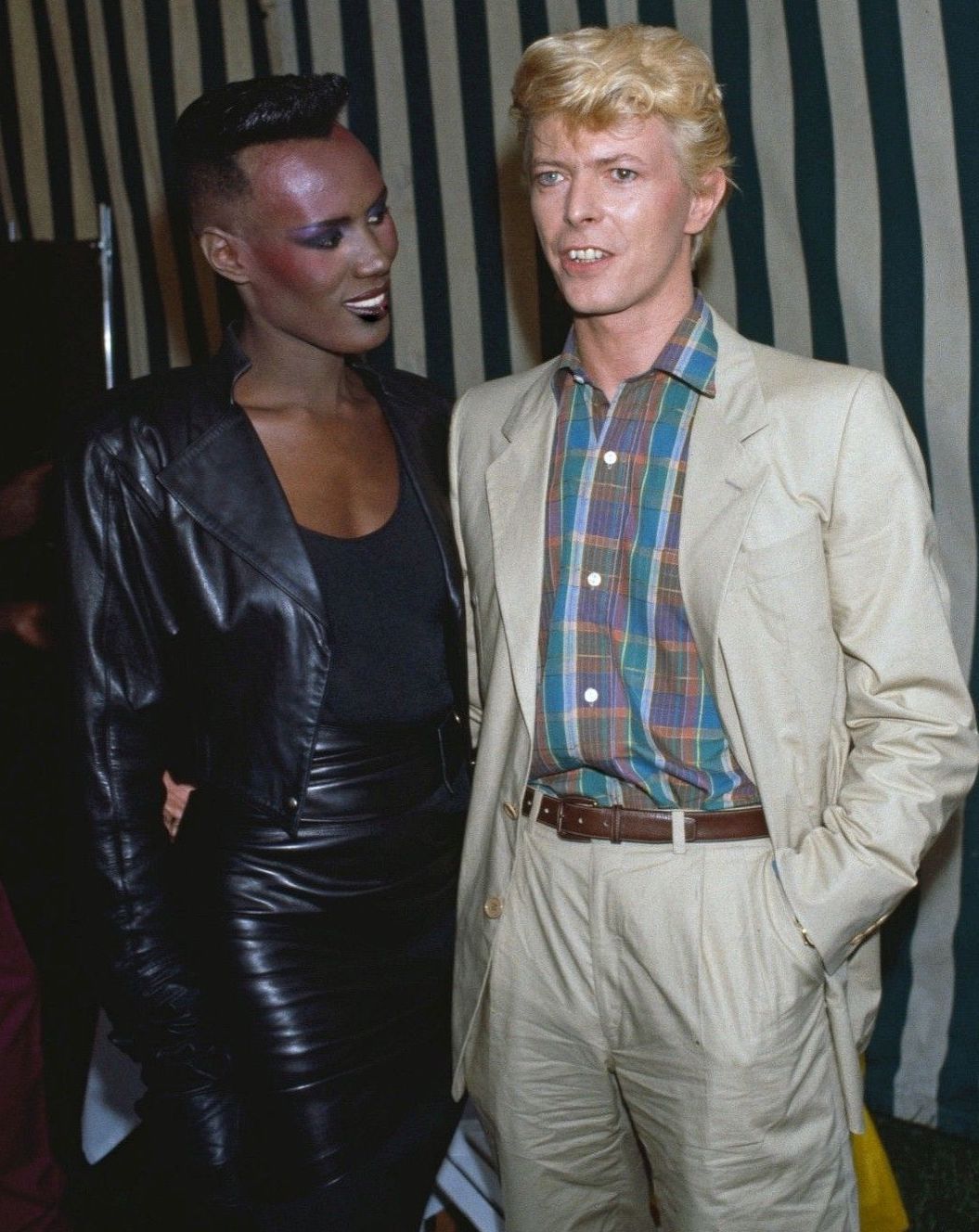 Did you know the Illuminati promote biracial relationships as part of the Kalergi Plan?

Isn’t it weird how, although David Bowie engaged freely in interracial relationships, he shifted into an alter he called the Thin White Duke who promoted fascism? 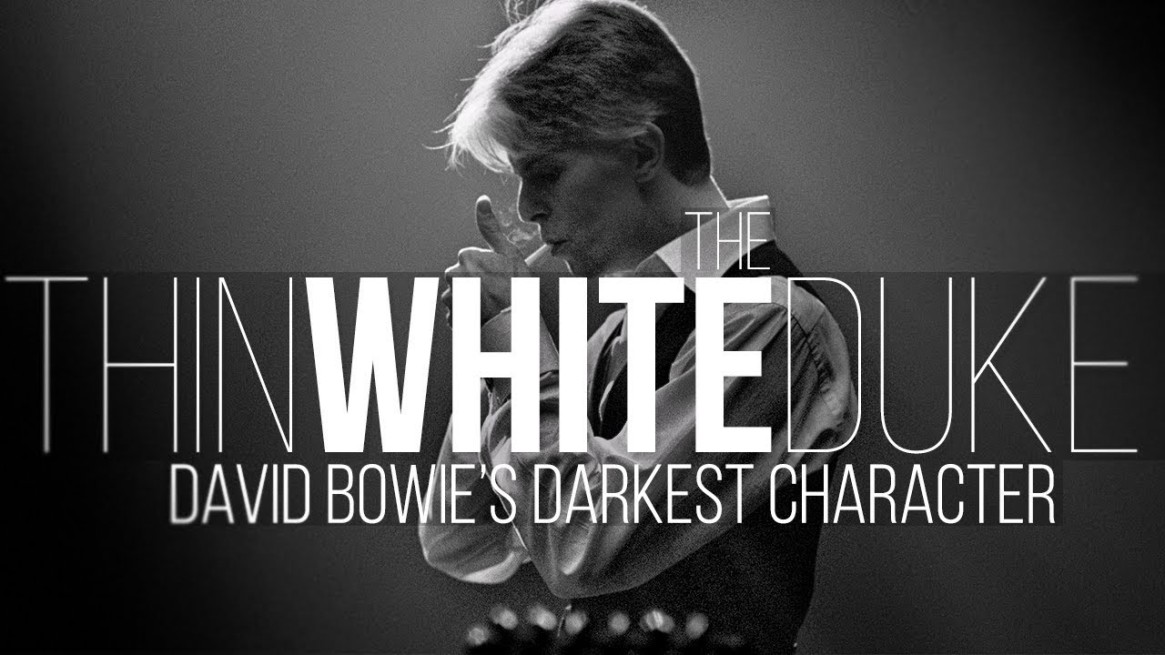 Bowie was detained at the border between Russia and Poland for his Nazi paraphernalia, he told reporters that England could benefit from a fascist leader, and he called Adolf Hitler one of the first rock stars. 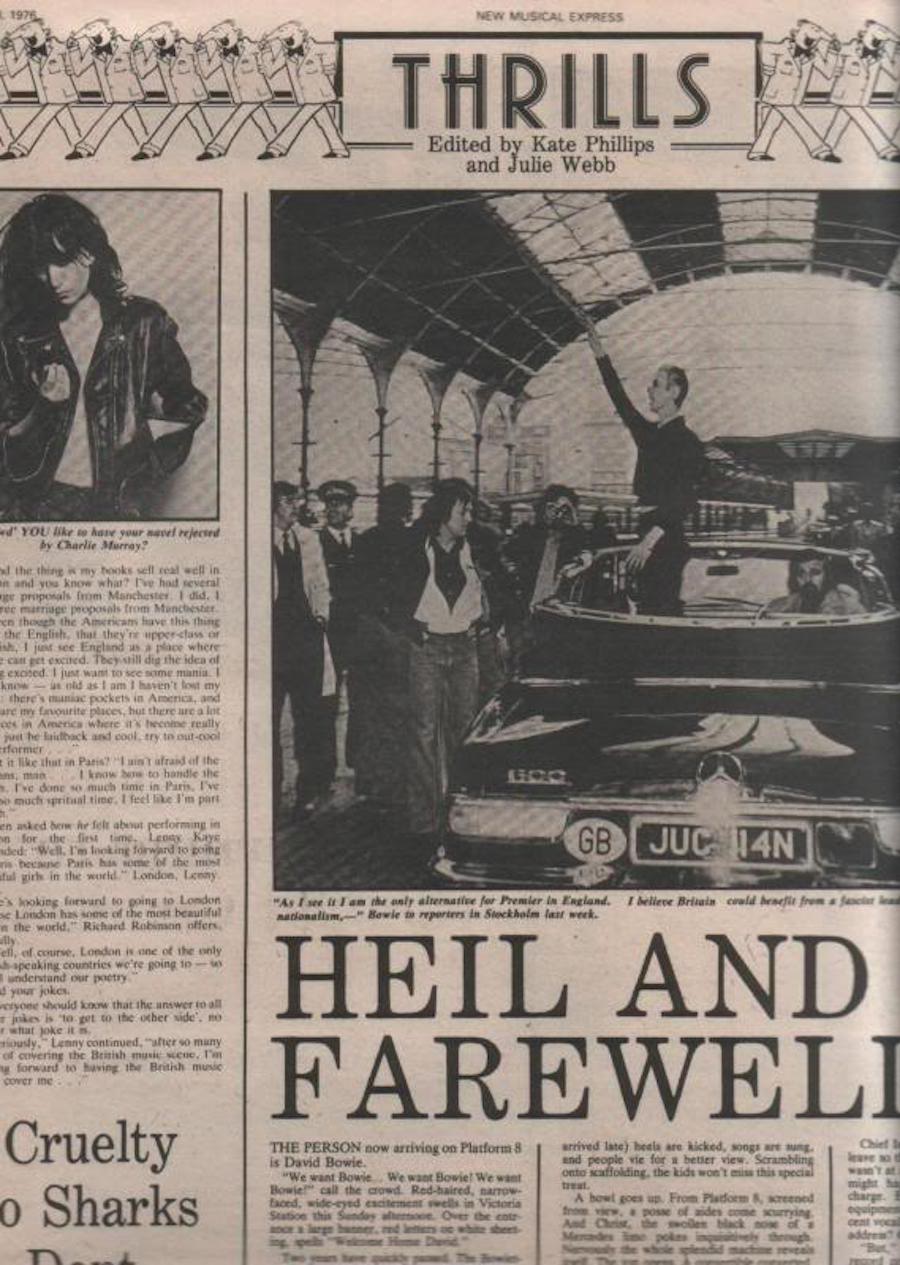 David Bowie drove around in an open Mercedes giving the Heil Hitler salute! 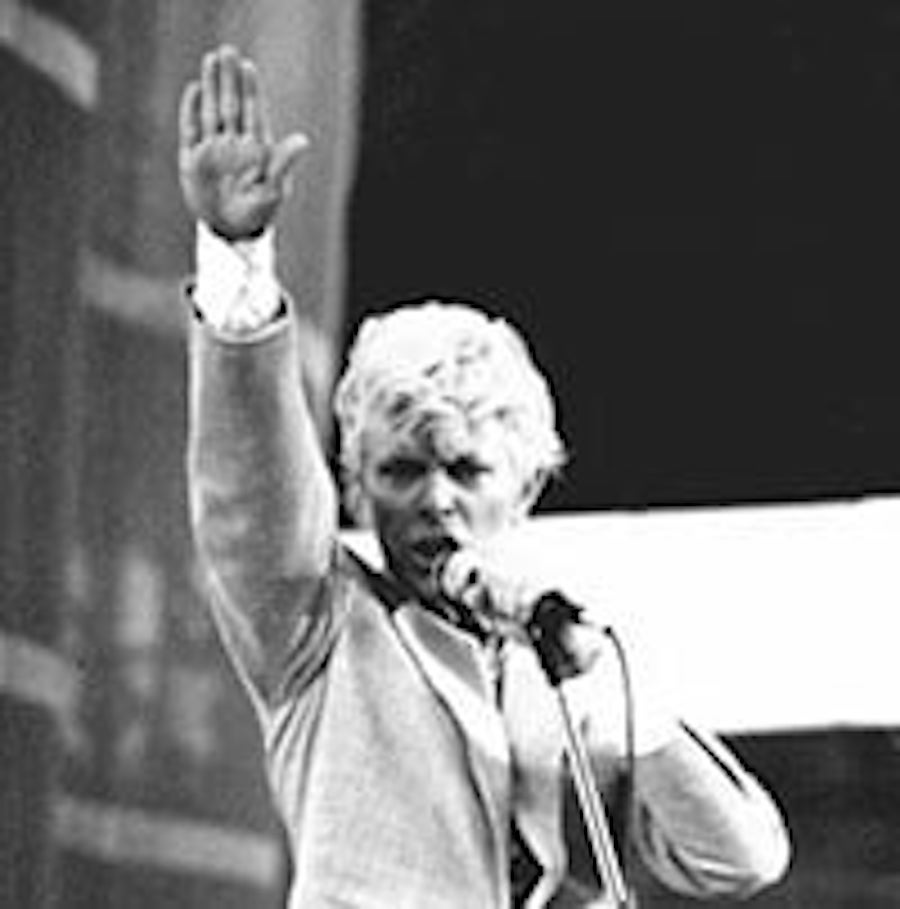 Did you know that the origins of the European Union, linked to the Kalergi Plan, are Nazi?  As Christopher Story explains, it’s connected to General Reinhard Gehlen, one of Hitler’s superspies, who later worked for the Mossad and the CIA. 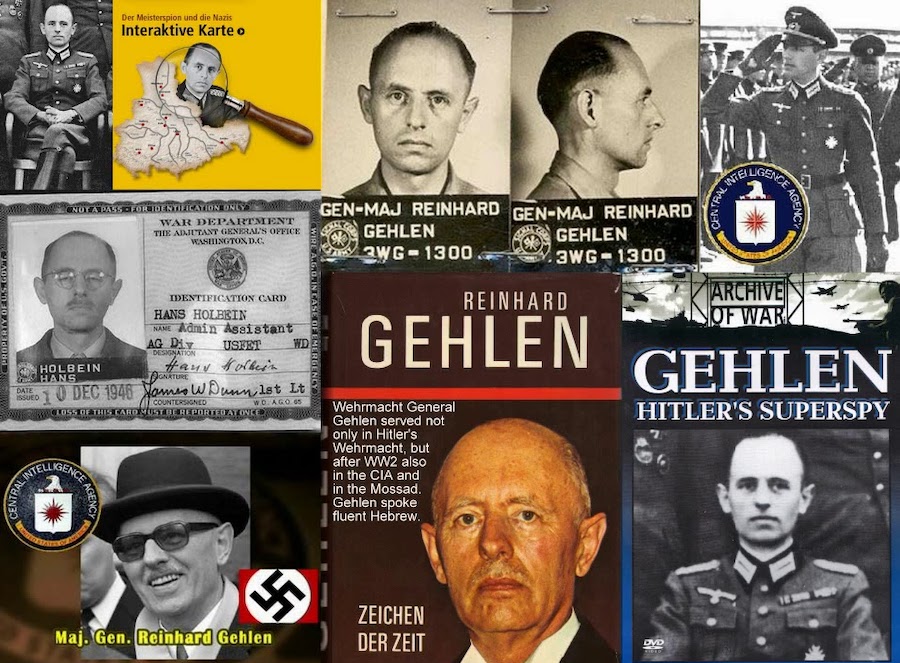 Did you know that the origins of our space program and our mind control programs are Nazi?

No wonder David Bowie was into this stuff.  It all adds up. 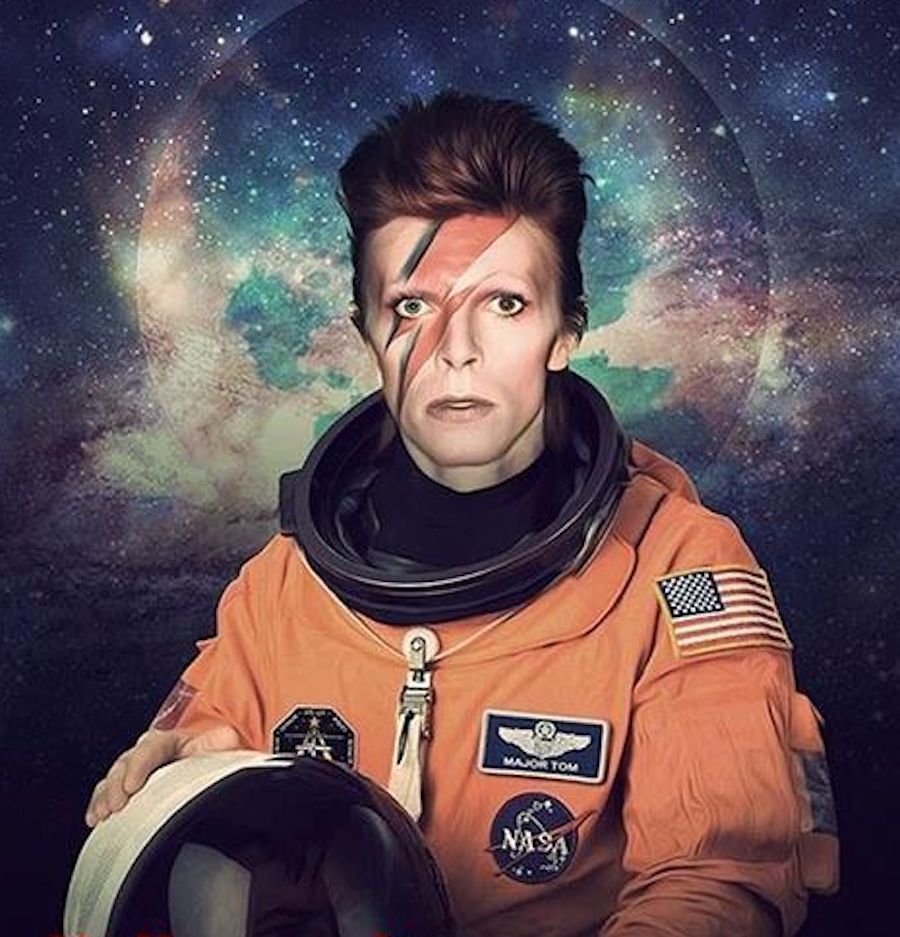 The New World Order used David Bowie not only to promote cultural agendas but to support the destruction of Ethiopia.

Live Aid looked like it helped starving Africans; but, as you can read in my article below, its real purpose was to use food as a weapon and ultimately to deliver Africa to the Chinese.

The Lie of Globalism, the Destruction of Ethiopia, & the Use of Food as a Weapon

Bowie planned to write a musical based on 1984 by George Orwell.  No wonder.  We are all living it.  Not only is Big Brother watching you, but so is your television.

Your Television Is Watching You

David Bowie died at the age of sixty-nine, a number used to indicate the simultaneous and mutual practice of oral sex, two days after his birthday and the release of his final album, Blackstar.  You can listen to a piece of his final album below and watch the official video.

The Illuminati had used him up.  I cannot help but wonder if David Bowie had entered into a luciferian soul contract.  He aptly called his style plastic soul, and the idea of selling your soul to the devil for fame is very old.

George Herber Walker Bush was a real member of the Illuminati.  He was head of CIA, he betrayed his country, and he raped little children.

Like David Bowie, President George Bush died on a special day connected to satanism and homosexuality.  Under a different soul contract, Bush was murdered on World AIDS Day, the death day of his father-in-law, the satanist and drug addict Aleister Crowley, who had his own influence on rock music.

My friend Andrea Davison, formerly of British military intelligence, says the satanists have a thing about being done in by their own.

English Heroes and Traitors – Andrea Davison and the Royal Family

That’s what it means to be with the Illuminati.

Return to my homepage, where you can scroll through more articles, by clicking the site title at the top of the page or at www.fightingmonarch.com

Follow my website, which you can easily do for free.  That way you can get new articles as they come out.

And please retweet or share as many articles as possible.

Our enemy depends on silence.

This site uses Akismet to reduce spam. Learn how your comment data is processed.